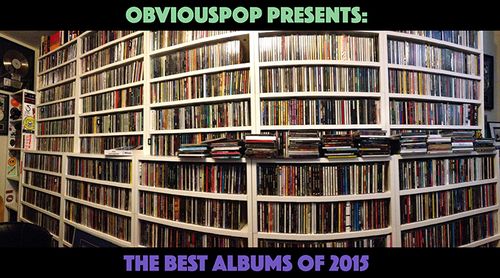 It's that time of year again! I love doing the year end list...going over all the new music from the past year and trying to rank and rate them, it's fun. But it can be tough, picking which deserve to be in the coveted Top Ten and then even harder to rank them from one to ten. I always feel it is even more fun to read other lists to see what I may have missed. This year was an interesting one. Not a whole lot blew me away, but there were a few. Jeff Lynne's ELO album was definitely my fave, it's a welcome return and quite a comeback from a legendary artist. An album that just blew me away this year is "The Race For Space" by Public Service Broadcasting. It's an amazing concept record about mans first attempts space travel and exploration. It utilizes actual broadcast samples to tell the history of the space race all with the most amazing mix of electronica, rock and prog.

I always say that on any give day it could be different, but here is this years list...

The ObviousPop Top Ten Albums of 2015

Dancing At The Blue Lagoon - Cayucas

This is only a preview. Your comment has not yet been posted.

The letters and numbers you entered did not match the image. Please try again.

As a final step before posting your comment, enter the letters and numbers you see in the image below. This prevents automated programs from posting comments.

Having trouble reading this image? View an alternate.

(Name and email address are required. Email address will not be displayed with the comment.)